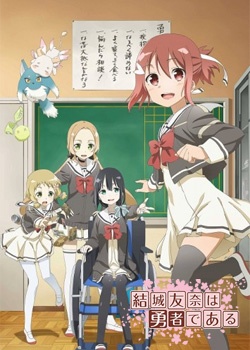 Official Summary: The story takes place in the era of the gods, year 300. Yuuna Yuuki lives an ordinary life as a second year middle school student, but she's also a member of the "Hero Club," where club activities involve dealing with a mysterious being called "Vertex." (via MAL)

Catie's Thoughts: There are two types of magical girl shows: ones where everything is as cute and up-front as it seems, and ones where everything is FUCKED and everyone is going to SUFFER. We seem to be suffering from an excess of the latter, and I firmly blame Madoka for that, but that's neither here nor there. Guess which side of the fence Yuuki Yuuna falls?

There are a lot of things to like about this show. While there is an excess of MAGICAL GIRL = SUFFERING, it does a lot of interesting things. Firstly is Togou, who is wheel-chair bound after an accident had her lose the use of her legs. Even while as a magical girl her legs are not restored, and her costume takes this into account and it's really cool. Yuuki Yuuna herself is an awesome, bubbly protagonist, pretty standard but I liked her. There was also the way the cell phones and smart phone apps tied in to their ability to transform, and the fact that they could force the transformations (which was pretty freaking awesome).

Overall I enjoyed it, even if I'm getting tired of the whole "something bad's going on under the surface" genre in my magical girl shenanigans. I don't really have any desire to see it again though.

Watch it: On Crunchyroll, of course.
This entry was original posted at Dreamwidth and has