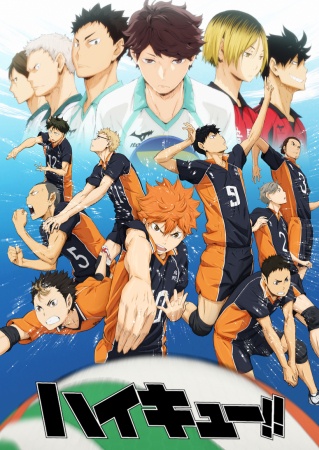 Official Summary: A chance event triggered Shouyou Hinata's love for volleyball. His club had no members, but somehow persevered and finally made it into its very first and final regular match of middle school, where it was steamrolled by Tobio Kageyama, a superstar player known as "King of the Court." Vowing revenge, Hinata applied to the Karasuno High School volleyball club... only to come face-to-face with his hated rival, Kageyama!

A tale of hot-blooded youth and volleyball from the pen of Haruichi Furudate!! (via MAL)

Catie's Thoughts: I'd been circling this series for a while because, well. Haikyuu is everywhere, really. It's super-popular, got a big cast of male characters - it's a shounen sports anime ffs. I remember how Prince of Tennis kinda ate a huge chunk of my friendslist whole (although I could never get into it myself). So I waffled, and I was finally talked into watching it - and I enjoyed the hell out of it. Mainly, because I wasn't expecting a sports anime to be cute.

I almost called it quits during the first episode though, but it's certainly worth it to stick it out. Every single character in this show is amazing, and adorable in their own right. The relationships between the characters, Hinata's boundless enthusiasm, and the way that they grow and change certainly makes up for any bits lacking. Even the way the games are staged is nice, although near the end we certainly fell into the "people in the stands explaining everything" trope that makes me go ehhh.

The animation is very much on point, and I can only hope that IG gets to do season 2 as well. I will be there for that, certainly.

Watch It: Crunchyroll
This entry was original posted at Dreamwidth and has